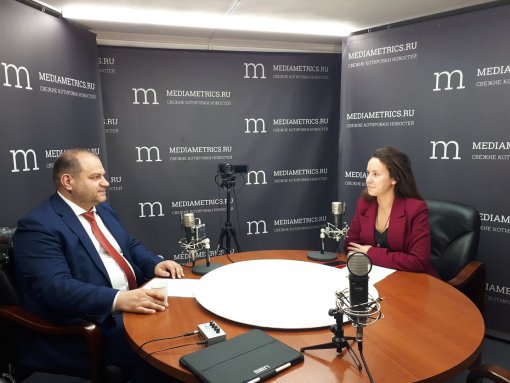 CEO of the MKS Group of Companies Maksim Zagornov participated in the «Conversation on Business» program on the «Mediametrix» radio. The expert spoke live about the prospects for the development of the distributed power generation industry, about the best breakthrough projects implemented in Russia in recent years, about the barriers facing by the industry and the Russian business community as a whole. At the end of the 45-minute conversation Maksim Zagornov shared his thoughts about what it means for him to be a successful businessman, and gave advice to the young entrepreneurs, the main of which sounded like: «To strive, to seek, to find, and not to yield».

«Distributed generation today is a global trend. And if in Russia large power plants were in demand in the 1960s, today it is all obsolete. The market requirements are met by the distributed generation objects - power plants located directly at the consumer. The situation is comparable to the one we are facing in the communications industry: cell phones have replaced wired communications. The big one went into small and mobile. Energy is moving in the same direction.»

«We are an open company. We also work with our competitors as well. We stand for the distributed power generation market shall be forming and developing. There's enough room for everyone. We're not fighting anyone. In fact, the market is so voluminous and large that it is not simple «to digested.»

«One of the main barriers the Russian business is facing is severe tax pressure. Today, the tax code is a presumption of guilt. It comes to the fact that in tax checks, charges are made as a carbon copy. And then business has to make excuses. Today business in Russia is simply not allowed to work, shut the oxygen off... Within the framework of the «Business Russia», we are trying to give a legal assessment of the current situation. We're trying to protect the state itself by keeping it a taxpayer base. We're trying to find a middle ground. We're not saying you don't have to pay taxes. A number of processes need to be simplified. This requires a political will to carry out a tax reform.»

«Business is not a story about multiplying money. The success of the business, in my opinion, is not due to the fact that you make a lot of money, but to the fact that you are useful to someone. Only when you're useful you are successful. Money is just a pleasant bonus, a kind of prize. The main thing is self-realization.»

«Businessmen devote all their free time to work. I think in Russia officials are happier people.»

«What can I advise a young entrepreneur? The most important thing is to go over the options. Maybe only one of the ten options will shoot. The main thing is not to give up. Some burn out quickly without being successful quickly. The most important is to search, to look for the niche. Not trying to copy someone. Everyone has some set of qualities and competences that were useful in his case and shot. Every businessman is unique, every businessman has his own way.»

The full video version of the interview: