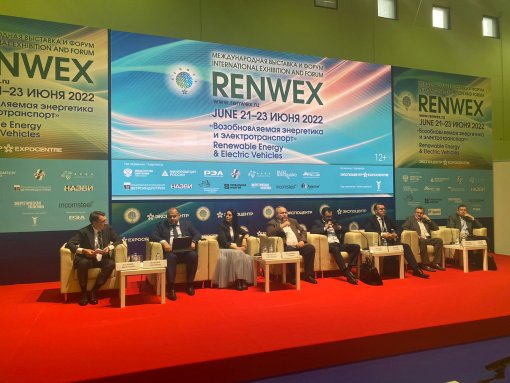 On June 21, the International Exhibition and Forum RENWEX-2022 started in Moscow. Traditionally, one of the key debated points was the discussion of distributed generation development in remote and isolated areas of the Far East and the Arctic. The panel session of the same name, organized by the Distributed Power Generation Association and the Corporation for the Development of the Far East and the Arctic, brought together key industry experts. Maksim Zagornov, President of the Distributed Power Generation Association, Director of MKC Group of Companies, shared information about the current situation in the industry and prospects for energy development in these territories.

As Maksim Zagornov noted, today the need for distributed generation facilities in Russia is great – it is felt by the increase in the number of requests from consumers. External challenges have also become one of the causes: due to the imposition of restrictive sanctions, supplies of technological equipment for large energy facilities are predicted to be interrupted. Businesses are increasingly opting for small autonomous power plants. According to forecasts, such distributed generation facilities will increasingly be in demand in the European part of the country.

The territories of the Far East and the Arctic also have great potential for implementing local generation solutions. At the same time, according to the expert, one of the optimal technological solutions is a hybrid energy complex (a combination of a gas or diesel station and renewable energy sources), and an effective financial instrument - an energy service contract. Meanwhile, one of the key problems for business is the lack of guaranteed capacity consumers in these territories. This is a deterrent for investors.

"Investors face significant difficulties when entering this market, there is a need for mechanisms of real state support to remove administrative barriers and create a system of economic preferences for the development of this type of business," Maksim Zagornov said.

"Energy service is a rather risky event," confirmed the Director of Innovations Department of PJSC RusHydro Vladimir Sofyin. The expert shared information on how the program of complex modernization of diesel generation in the Far East is being implemented through an energy service (the first pilot AGEC will be launched in Verkhoyansk in the next month, four more in September) and outlined the problems that the corporation has faced in the current realities.

"The cost of capital expenditures in the construction of hybrid energy complexes has increased, the key financing rate of the Central Bank has increased. If it is not possible to compensate investors for the growth of key rates, then either have to break down the construction of facilities into stages, or shift the timing. All this greatly affects the economy of the project – it is becoming more expensive, its efficiency is deteriorating," Vladimir Sofyin emphasized. Meanwhile, RusHydro program is not planned to be suspended: after all, its goal is to improve the quality of life of residents of 380 settlements in the Far East.

Director of Hevel Energoservice Anton Usachev confirmed the deterioration of the economy of distributed generation projects in these territories. Meanwhile, the expert emphasized that the company has made major efforts to keep in check the prices for its profile equipment (solar panels) and the financial indicators should return to the previous level in the foreseeable future. The expert also spoke about the company's plans in the future for 10-15 years ahead: to implement projects using liquefied natural gas and hydrogen, which will entail a lot of work to change the technical parameters of the projects.

Deputy Director of the Department of Industry Expertise of the Far East and Arctic Development Corporation JSC, moderator of the discussion Vasily Potemkin emphasized that in the current difficult geopolitical and economic conditions the progression of energy infrastructure in remote areas of the Far East and the Arctic is impossible without combining the efforts of industry associations, authorities and business. The developed Roadmap for the implementation of the concept of attracting private investments in the development of distributed generation in this macroregion has already been approved by the professional community and will be submitted to the Government of the Russian Federation for discussion in the nearest future.