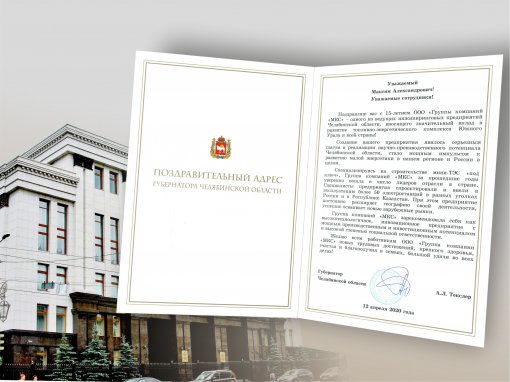 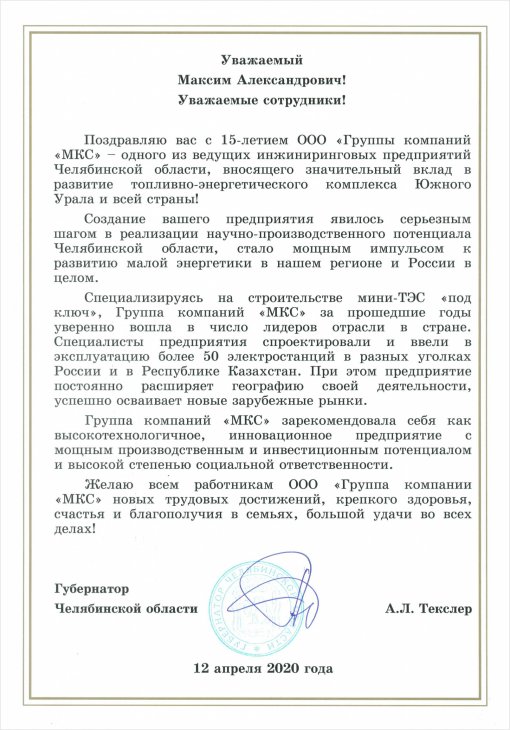 On the eve of the 15th anniversary the Chelyabinsk region Governor Alexey Texler sent a congratulatory address to the team of the «MKS Group of Companies».

«I congratulate you on the 15th anniversary of the «MKS» Group of Companies», LLC — one of the leading engineering enterprises of the Chelyabinsk region, which makes a significant contribution to the development of the fuel and energy complex of the South Ural and the whole country!

Birth of your enterprise was a serious step in fulfilment of the scientific and production potential of the Chelyabinsk region, it became a powerful impulse to the distributed power generation development in our region and in Russia as a whole.

Specializing in the mini-MPP turnkey construction, the «MKS» Group of Companies has been among the industry leaders of the country over the years. Specialists of the enterprise designed and launched over 50 power plants in different parts of Russia and in the Republic of Kazakhstan. At the same time, the company is constantly expanding its geography, successfully developing in the new foreign markets.

The «MKS» Group of Companies has established itself as a high-tech, advanced enterprise with a high production potential and social responsibility.

I wish all the «MKS» employees new work achievements, strong health, happiness and well-being in families, great success in business!»