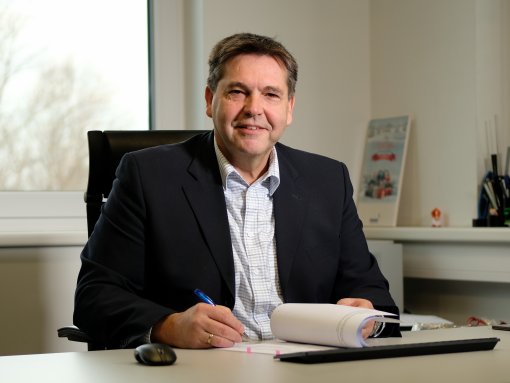 At the International Exhibition of Industrial Boilers and Power Generation Equipment HEAT&POWER, which was held in Moscow, MWM Austria GmbH presented a large stand. It was there that the meeting with the CEO of MWM Austria GmbH Andreas Obwaller took place. The conversation turned out to be sincere and informative, covering the secrets of MWM's business longevity, the new challenges of the time, the company's technological innovations, and the prospects for development in the Russian market.

— Andreas, I am glad to see you on the year of MWM’s anniversary. I would like to ask you a few questions. MWM has turned 150 — an impressively long period. What feelings and emotions do you as a leader and your employees experience?

— As a leader of the MWM Austria GmbH, I am honored to work for such an old and traditional company.  Looking back at history, we can notice that there were a lot of changes within the company. And due to the hard and tireless work of all the employees, we became very successful at every single field of our activity, and I am also very proud of this. 150 years is a long period and that’s why we should properly celebrate the anniversary, which became possible thanks to the company’s founder Carl Benz.

— What, in your opinion, is the secret of MWM's business longevity?

— As I’ve mentioned before, I think that during this long period the company underwent a lot of changes, at the very least surviving two world wars. I believe the secret of longevity always lies in the people, who work for the company, on whom it rests, and who managed to navigate this famous company throughout these 150 years.

— MWM, like millions of companies around the world, celebrates its anniversary in a pandemic. How have you coped with the new challenges of the time?

— Yes, our anniversary is taking place during a pandemic. We have scheduled many events, but the pandemic has affected everyone's plans. But, as I have already said, thanks to the fact that we are a strong company with highly qualified employees, as well as thanks to new technologies, we managed to avoid serious problems. Of course, we hold face-to-face meetings less often, but we are gradually trying to get back to work in the usual mode. In general, we are satisfied that the pandemic has not caused significant damage to the market.

— MWM sells engines all over the world, including Russia. Russia is one of the most important countries for us, and, I think, the largest single country in terms of sales. I guess Russia accounts for around 20% of our business. This region is a very interesting and successfully developing market. All these factors make us adjust the scheme of our distribution network. We work with official distributors; we work with large customers with whom we conclude direct contracts. Thus, we can offer our customers a wide choice of sales channels. The clients can contact us with any request. They can cooperate with official partners, EPC contractors or sign a contract with us directly. I think this is another key to success. We will continue to expand our distribution network.

— MKC Group of Companies has been the official distributor of MWM for almost 5 years. How do you assess the effectiveness of such a partnership?

— MKC group of companies is one of our most successful partners. MKC has been the official distributor of our products for 5 years. I remember our first meeting with Maksim Zagornov, if I'm not mistaken, it was also at an exhibition in Moscow. I don't remember the exact date, but I guess it was about 9 years ago. We discussed one project and a week later we sent each other an email with the text "please, send the contract". This was the first step and the beginning of our fruitful cooperation. I think MKC is also successful on the Russian market. I would like to emphasize that MKC is a reliable partner that you can always trust. I am glad that MKC is part of our distribution network.

— How different or similar are the business mentalities of a European and a Russian?

— There is a difference between the European and Russian business mentalities. Of course, Russia is part of Europe, but Europe is a combination of different mentalities, not only of Russia, but also of Italy, Spain, and other countries of southern and northern Europe. They are all unique. The Russian mentality arouses interest. Sometimes Russian companies need a long period of discussions and preparation, but decisions are made quickly, it can literally take two days. The situation in Europe may be a little bit different. In Europe, the process starts with a period of preparation, then a certain amount of time is given to make a decision, and then a contract is signed. But the Russian mentality seems curious to me, I like working with Russian clients.

— MWM is all about innovations. What technological advances are you ready to present?

— MWM is a company well known for its innovative solutions, which we have been implementing for 150 years. At the moment, the issue of green energy is relevant, to a certain extent it is our future. We are optimizing our engines for the use of hydrogen, and now gas with a hydrogen content of up to 25% can be used as fuel in engines without additional technical modifications. We have a lot of projects, and our R&D department is working hard to prepare our engines for the use of hydrogen in the near future so that we can meet the demand in the market. In Russia, natural gas, according to my observations, will remain a priority fuel in the coming years, but in other regions, hydrogen will undoubtedly become available soon, which we are ready for since this is what we are working on. In addition, in June we released a new series of TCG 3020 V12 and V16 engines, featuring increased power output. This is the next step in the improvement of the 3020 series engines in the medium power range. And, of course, we have many other projects besides engines of this series, which we will consistently implement.

— MWM is 150-year-old, MKC is 16-year-old. What advice would you give so that we could also celebrate such an impressive anniversary?

— My advice is to be always very flexible, react quickly to the market changes, and consumer demand. Besides, of course, you should pay particular attention to employees: it is necessary to conduct training and build a strong team that will be able to navigate the company. I believe that's the most important thing.

— Thank you for our conversation.

The interview conducted by Mariya Nevolina,

Head of the Public Relations Department of MKC Group of Companies